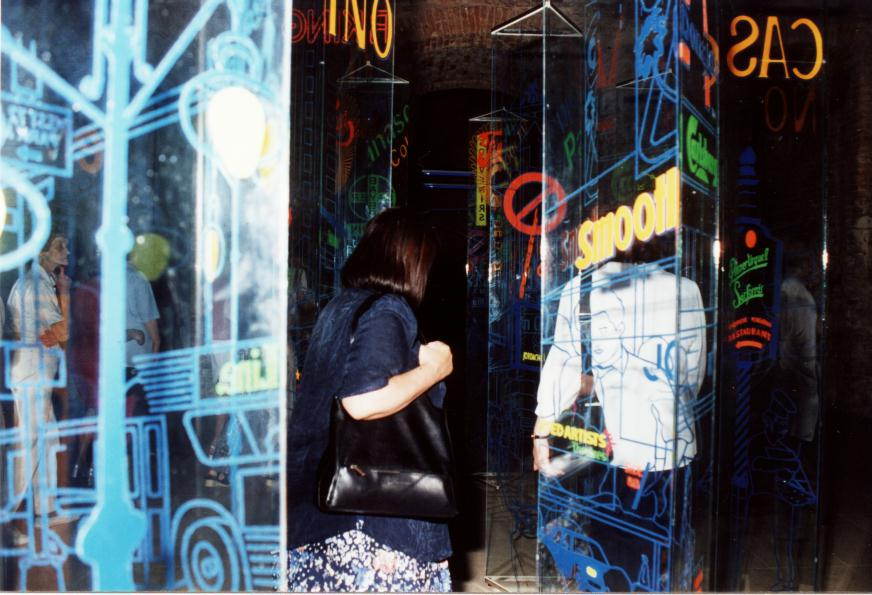 The art of András Mengyán is a special case in Hungarian visual arts. Though his works have been present for quite a long time both in Hungary and abroad he still appears as a permanent outsider. This fact derives more from the circumstances than from his personality or artwork. He has an extremely steadfast career behind him: the focus of his interest has always been the interpretation and the concrete formulation of space. The basic principle of his works is permutation without repetition, the representation of space, time and various dimensions. What interests him throughout his career is the independent life of forms and the relations in-between them no matter if he makes "figurative" or serial artpiece. On plane - printmaking, painting, film, video -, in space - sculpture, installations -, or perhaps the represented aspects in combinations of these two. 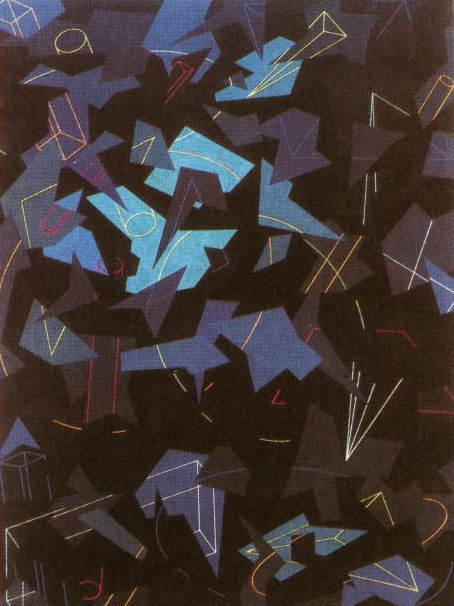 The Kiscell exhibition is a comprehensive one to a certain extend because it refers to almost all the elements of the complex art of Mengyán. On the other hand its "where am I at now ?" shows the present as well. The space is structured in three characteristically different units: the first one is in the sanctuary part, the 17-dimensionTwin-space. Its prefiguration or archetype was the Six-dimension Broken Line made in 1988. At a starting point that piece was prepared on canvas i.e. on plane, whereas the work here hangs monumentally in space. This piece is an expressive embodiment of the geometrical way of thinking practised by Mengyán throughout his carreer: the ordering of the basic visual components of forms in space. The colourful poles floating in space with the help of many invisible thin plastic span ropes form a multi-dimensional construction. The seemingly "dry" geometrical space-modell is made of a special paint offering an interesting depth while illuminated by UV light.
The second unit is the Street I-III.  This belongs to the more popular, almost figurative works of Mengyán. He mentioned in one of his previous interviews that while classifying the basic visual components he got to the point where the connection between environment, nature and the outside world and the arts became more important both for him and his public too. The enviroment work titled  Programable  Space  made in 1988 had already been based on this idea, but in that case the  "ornamentation" was played by a  film projected on it. That art-ensemble systemizing the visual stimuli and signs of the  urban enviroment, vast number of advertising lines and neon lights appears as paints on glass like a transparent, traversable  installation. The installation is showed in its original sense: space-equipping and space-determination take place. The tripartition is based on the idea of order-chaos-order or construction-deconstruction-construction. 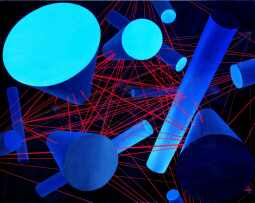 The third unit can be connected to his previous artistic activities, too. The space-spirals of the Interrupted Continuity refer to his early works e.g. the 1974 series of Logic Of Forms. The difference is not merely a change of the transformation from the plane-construction to the spatial dimension but also a difference in quality. On a rectangle plane bordered by a screen a colourful spiral starts from one corner and continues along through the whole field to the opposit corner. The spiral rises up into space, it´s colourful, and the interruptions - the continuity - is only optical. This artpiece too is based on black light, and it may be a trivial solution in an "everyday usage", but both in his space-installations and his paintings Mengyán places the compositions into other dimensions .
All these regards to his new paintings, too. The process wich started practically three decades ago with unbroken renewal and conversion is still able to create new qualities. 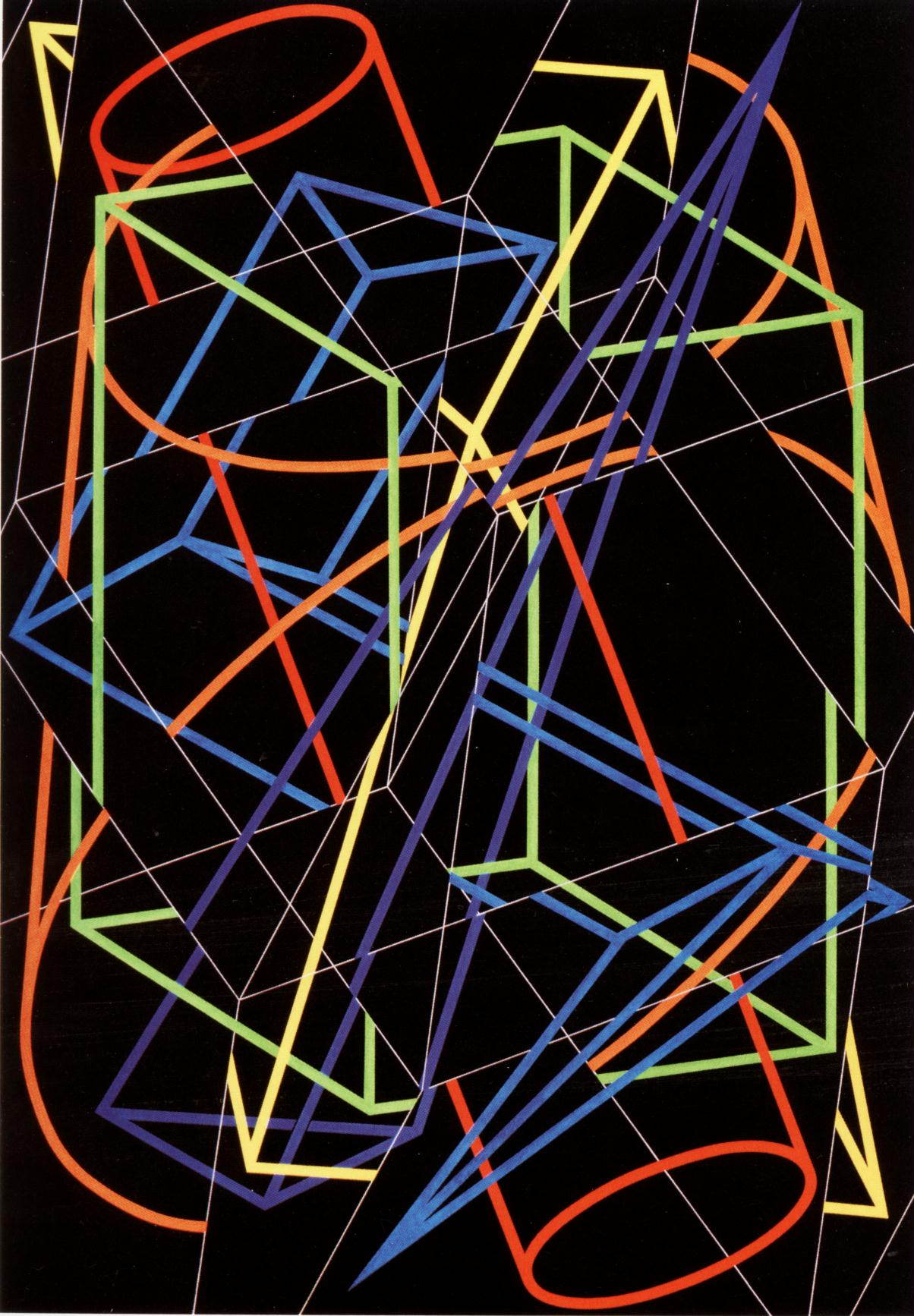 András Mengyán is probably one of the most rational of the irrationalists - if there were another such strange fellow of his kind. With dauntless stubbornness through decades he has been examining, modelling and systemizing the persumably common "rudiments" of the existing world and the arts, their movements on plane and in space, their potential transformation and change. Many and for long believed of him - surely even himself too - that he´s one of the late orthodox constructivists, because he had built his pictures almost exclusively in accordance with the obvious strictness of geometry and mathemathics. But the true constructivists always stoped at a border given by the limitation of their own tools: perhaps only the genius of Malevich could see into the depth of the "black squares". Ceaselessly experimenting Mengyán never thought the road would end there, he was always aware of the fact that at one given moment and place only the chosen tools would prove their insufficiency, therefore he could move on and on again towards the unknown. Early he senced the fallability of the designed and ponderable reality, and beginning from this point with growing intensity he tried observing these new allusive dimensions behind things and phenomena. András Mengyán knows well how impossible it would be to make a one-dimensional creature understood what plane is, or even what line is: why would it be easier for us to see into a seventeen-dimensional world? 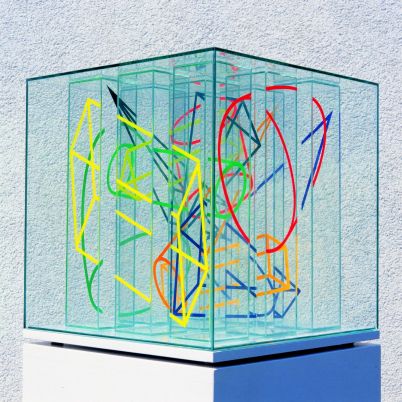 In the book-like catalouge of the 1995 show in Mûcsarnok exhibit space Ildikó Nagy named two basic principles in Mengyán´s creative attitude; "methodology" and "curiosity". She drew our attention to the important changes in the creative method, she wrote: "The order disappeared behind the oeuvre". Mengyán formulated this in the volume with other words: "I wanted to make the objective, formal analysis more personal". This kind of systematical objectivity working with less perceptibility gives also credit to the three compositions showed at the Kiscelli Museum´s Churchspace: this gripping, mythical space carries a promise to a new reality in such way that the artist doesn´t have to deceive the spectators. Mengyán doesn´t for a second denies his tools and schooling but at the right moment he lets the viewer´s hand off leaving him/her, letting them to soar towards the freedom of spirit. 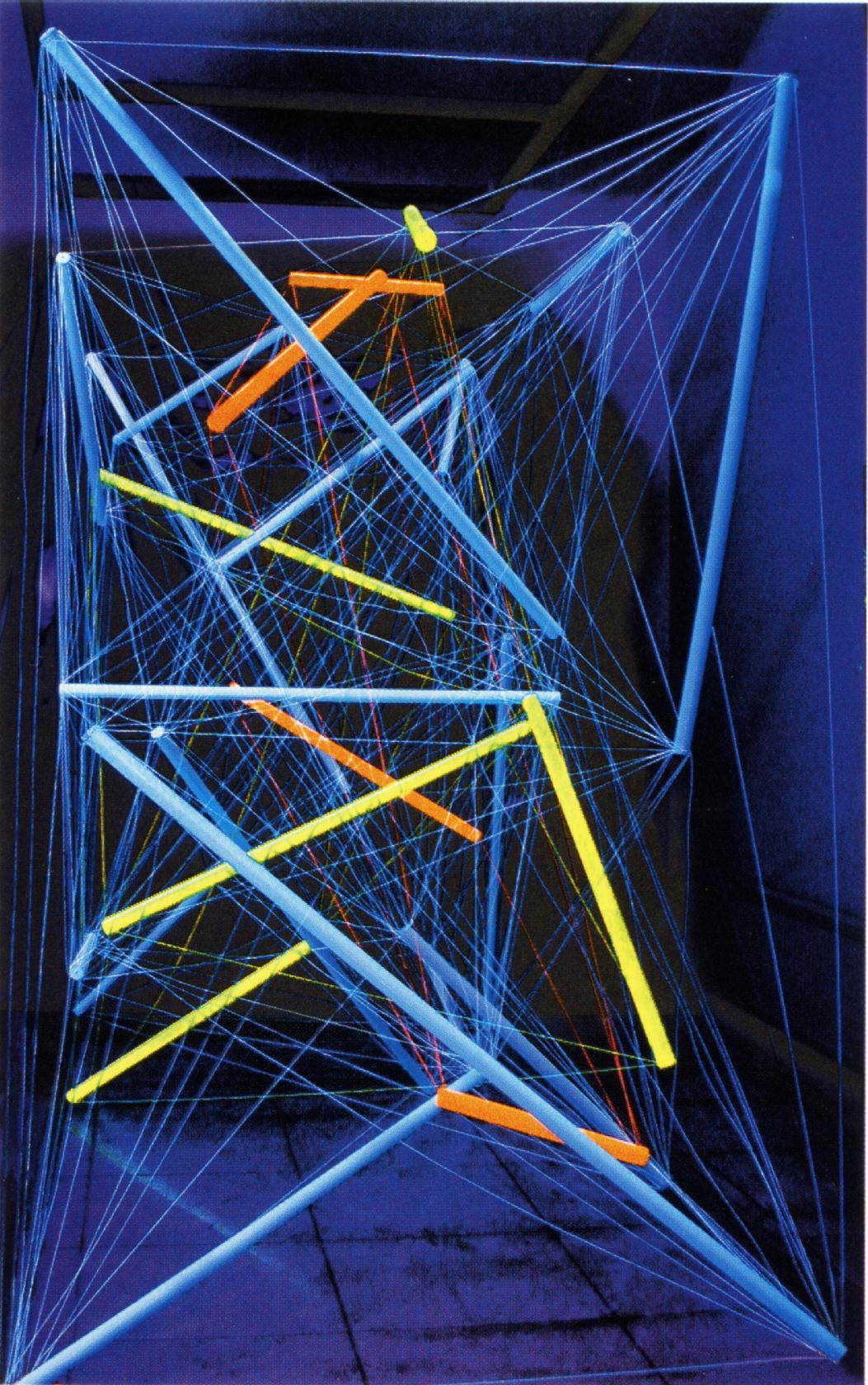